New evidence reveals Amazon’s culpability for the deaths of 6 workers in a warehouse collapse last year in Edwardsville, Illinois. Documents obtained by More Perfect Union show that the support beams in Amazon’s warehouse weren’t anchored to the ground — a grave violation of international building code.

When a tornado struck the Amazon facility on December 10, 2021, the warehouse collapsed killing six people. One of them was a 26-year-old delivery driver named Austin McEwin. The McEwin family has since filed a lawsuit against Amazon, and is represented by Jack Casciato of Clifford Law Offices. The attorneys on this case filed a FOIA with the West County EMS & Fire Protection District, and learned that the support beams in the warehouse were not properly anchored to the ground, violating international building code and leading to the deadly collapse.

“Looking at the base of the columns more closely, I could find no weld or bolted connection at the base of any column,” reads the report. “An examination of several of the empty pockets where columns once stood also did not reveal any indication of positive securement of the columns at or below the finished floor level.”

The investigation also revealed that Amazon began receiving severe weather warnings about an impending tornado near Edwardsville as early as December 9, 2021, a full day before the tornado struck. Instead of sending workers home, Amazon forced workers to stay through the storm, placing profits over people and costing six workers their lives.

The Amazon facility in Edwardsville — in tornado alley — had no FEMA safe-rooms in the building. Instead, Amazon provided a “Take Shelter Area”, which survivors described as a “windowless hallway” and that Amazon said themselves was not designed to be a storm shelter.

“If Amazon knew that it couldn’t protect its employees, there was nothing stopping them from telling them around noon or 1 that day to go home, seek refuge,” said Casciato. “And you really have to question if profits took precedence over safety.”

Jeff Bezos called the building collapse “tragic” in a tweet, but did not take the time to visit the Edwardsville facility or console the families of the victims. Austin’s family hopes that the lawsuit will bring not only justice and accountability, but for the multi-billion dollar corporation to start treating their workers appropriately. 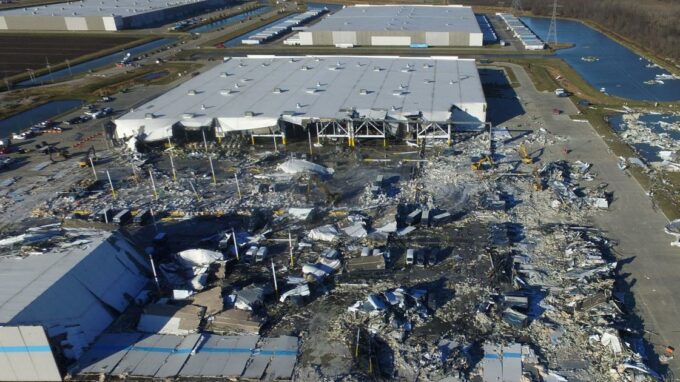