Amazon managers at the company’s unionizing warehouse in Albany, NY have fired a 60-year-old cancer patient after an investigation confirmed that he kicked an empty box.

When the incident occurred late last week, Michael Verrastro was alone at a workstation and struggling with several pieces of malfunctioning equipment. Problems with scanners and printers had already required him to switch to a new workstation, and they were now putting him increasingly behind on a production quota that Amazon rigidly polices. Faced with yet another error, Verrastro channeled his annoyance on a chunk of hollow cardboard.

Conscious of disturbing his co-workers and concerned that the box he struck may have made contact with another box outside his workstation, Verrastro said he quickly apologized to a fellow associate sitting nearby. The conversation was brief, he recalled, as she acknowledged her own frustration with the technology problems.

Later, a supervisor approached Verrastro and asked if he’d like to take a walk and discuss the incident. Instead, behind on his work, he opted to stay at the workstation. The next day, feeling unwell from his cancer treatment, Verrastro received permission to go home early. That would be the last time that Verrastro would step foot in the warehouse; he was suspended from work on Sunday before being terminated for allegedly violating the company’s Workplace Violence, Drug and Alcohol abuse policy.

Now in his second year of treatment for an aggressive form of prostate cancer, Verrastro had worked diligently to maintain his health benefits. While undergoing radiation, he’d begin treatment at around 7:30 in the morning, then drive to Amazon for his morning shift by 8:15. Those health benefits will now be cut off at the end of September, leaving him exposed in a fight against the disease that is far from over. The day before he was fired, Verrastro had an appointment with his oncologist, who recommended an ultrasound on his kidneys.

Verrastro is now faced with hard questions and no good answers. Divorced in 2018, he lives alone and is facing unmanageable medical bills as soon as his insurance runs out. At age 60 and weakened by his cancer treatments, he worries about falling into a deep depression. It’s something he has experienced before; Verrastro has a history of mental illness, and this spring, after suffering a crisis at work, he was taken in an ambulance from the Amazon warehouse to a mental health facility. The effects of the hormones that have been part of his cancer treatment have exacerbated his condition, something that Verrastro said he has shared openly with managers.

“I have a history of suicidal ideation, which they know about,” Verrastro said. “What if I did go out there and did the unthinkable and threw myself off a mountain over at the park with a 250 foot drop? Would they be surprised that I did that, given my mental health history? ‘Well, he just got fired and three days later, he killed himself.’ I guess I’m very, very disappointed in how it was handled.”

The Albany warehouse, located in Schodack, NY, opened in the fall of 2020, and Verrastro, an early hire, began working at the facility that October. The termination was the first time he’d experienced disciplinary action of any kind from Amazon management, making it all the more perplexing for him. With a background in state government, Verrastro said that he was fastidious in his adherence to safety protocol in a warehouse where serious injuries have become an almost daily event.

The dangerous conditions at the warehouse have been a main catalyst for workers seeking to unionize with the Amazon Labor Union. The NLRB last week indicated that workers had handed in enough valid signatures to trigger a union election, though no date has been set yet.

Committed to nonpartisanship after his years working in state government, Verrastro had nonetheless expressed occasional dismay with Amazon’s treatment of pro-union workers and the anti-union posters that management placed throughout the warehouse. In hindsight, he suggested that a conversation he had with his supervisor may have unwittingly placed a target on his back.

The discussion took place a day after he’d been forced to wait nearly an hour for help from an operations manager, who was engaged in a somewhat hostile conversation with another production associate. The associate had been walking around the warehouse and engaging with coworkers about various issues they were facing, a practice that upset the operations manager.

A day later, Verrastro says he mentioned the conversation to his own supervisor, who then called the woman in question a “troublemaker.” The woman, as Verrastro would soon discover, was Heather Goodall, the lead union organizer at the warehouse. Now, Goodall is connecting Verrastro with the ALU’s lawyers, who are filing unfair labor practice charges against Amazon on his behalf. 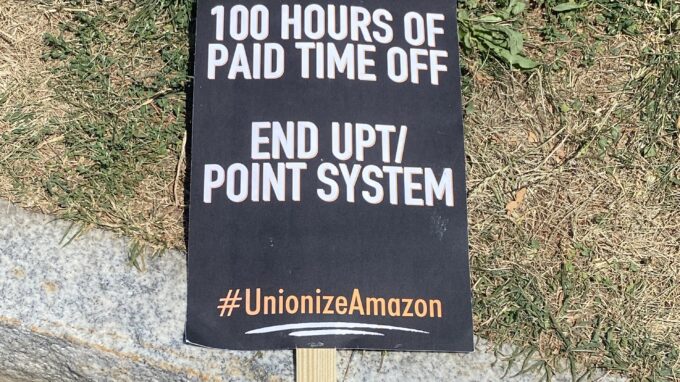