DHL workers on strike for better pay and stronger benefits were brutalized by police in riot gear in Pawtucket, Rhode Island. The picketers who were attacked by police suffered broken ribs, a fractured tailbone & concussions.

The DHL drivers, who have been on strike since June, work for subcontractor Northeast Transportation. The are striking over low wages and prohibitively expensive healthcare. The striking workers tell us that they make just $18 an hour, while drivers that work for DHL directly make closer to $30 an hour.

Tiffany Thompson: Not the best experience.

This is what happened, in their own words.

Matthew: So the day we had the [Teamster] Joint Council 10 rally out here, we invited the governor, lieutenant governor, the mayor of Pawtucket—every single legislator that was pro-labor here and present at this picket line speaking on behalf of these workers. As soon as the police saw that all the major politicians and legislators of the state had left the scene, they showed up in riot gear, and they had every intent at that point of brutalizing us.

Charles Reid: So we went to picket the vans like we normally do. A few of us noticed a guy that has been a constant problem—one of the scabs—coming out. So we were picketing him and then the cops start pushing us to let him through, so we started letting him through and as he’s going through he’s almost running over people.

Matthew: I went over to the police officer and said, “That man has a warrant, and he just attempted to run us over. Why are you not pulling him over? Why are you not doing anything about this?” At that point, badge 186 punched me in the chest and backed me up.

Tiffany: A specific officer was definitely manhandling unit members and I wanted a closer video of that. So, I made my way closer to the crowd and I did get some video footage on my cell phone. And I see my brother Matt Maini and I put my hand on his shoulder, and I was on the ground the next thing I know.

Charles: She was on the ground with about four or five male officers on her. They were physically abusive to her.

Matthew: And she’s screaming the whole time for help.

Charles: So I start walking in that direction, talking to the cops, telling them, like, you don’t need to have five males on her and stuff like that.

Matthew: Five to six of them jumped on me, handcuffed me, threw me to the ground after I was handcuffed, face first, where I broke a rip. A police officer who is about 6’6”, 300+ pounds jumped on my tailbone of my back and fractured that.

Charles: One of the officers comes and sprays the whole crowd. I get sprayed, the cop that’s standing in front of me gets sprayed. Pretty much they got me down to the ground, have my face smushed to the ground. They kneeling on my back, twisted my arm almost out of socket.

Tiffany: I did receive multiple bruises and marks all over my body, and I do have a concussion.

Matthew: They took us to the prison cell.

Tiffany: I was locked up for the weekend—Friday, Saturday, Sunday, and I went into court on Monday.

Matthew: Again, we were peaceful. We were doing our normal, everyday picketing, which is—yeah, it’s a picket line. We’re gonna chant. We’re gonna call a scab, scab. Those are all protected NLRA rights.

These DHL workers have been on strike since June over poverty wages and wildly expensive healthcare. They’re employed by Northeast Transportation—an independent contractor of DHL.

Tiffany: DHL direct workers make close to $30 an hour, where we are subcontractors, we only make $18 [an hour], and we do the same job. It is not a living wage. I am a single mom of four.

Tiffany: Northeastern transportation receives money from DHL to provide health care for the unit. At this current time, they only provide healthcare for five members. It’s unaffordable.

Charles: I pay $400 a month just for myself. It’s kind of high to pay that on $18 an hour and  have to pay everything else like bills, and rent, and have to have food and transportation.

Despite police violence, the drivers say they’ll remain on the picket line until they win a fair contract from the company.

They’re also demanding an investigation into police conduct on the picket line.

Matthew: We are going to sue the city of Pawtucket. We are requesting a hearing, an internal review board to come in and investigate why it transpired that way.

Tiffany: These officers need to lose their badge. They need to understand that their behavior is unacceptable.

Matt [on picket line]: And remember, the more we stick together against them, the more likely we are to win this fight. We stuck together that day. If my sister could take a beating like that from five men for me, then I sure as hell owe it to her to be out here every day on time, ready to go.

[Workers picketing]: What do we want? Contract! When do we want it? Now! 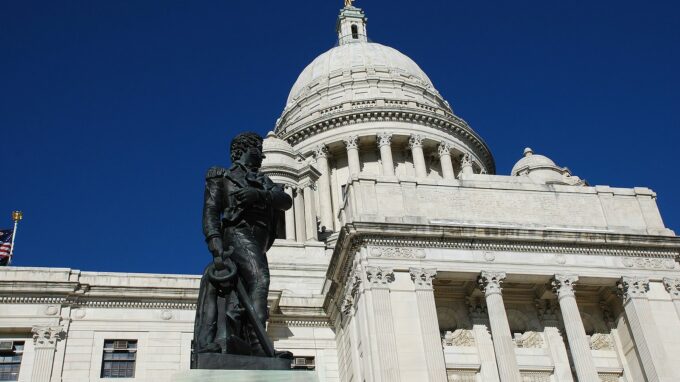