Starbucks Workers United has filed charges with the National Labor Relations Board alleging that Starbucks has been cutting workers’ hours nationwide in a deliberate union-busting campaign.

“These hours cuts are in swift response to workplace organizing campaigns at Starbucks stores around the country,” wrote the union, which has organized more than 130 stores across 27 states, in its formal complaint. The complaint asked for an immediate injunction against the ongoing hour reductions.

In a survey of its members, Starbucks Workers United says that workers have lost anywhere between two and 15 hours from their schedules each week. Starbucks requires at least 20 hours worked per week to maintain eligibility for benefits.

The complaint says that the reductions have happened in at least 20 states, including Maryland, Florida, New York, Ohio, Colorado, California, and Texas.

“The reduction of hours has resulted in lost pay; has rendered, or will soon render, employees ineligible for benefits that have hours-worked eligibility requirements, including health care coverage and the Starbucks College Achievement Plan (tuition coverage); and has or will soon result in the constructive discharge of Starbucks employees,” the complaint further asserts.

Starbucks workers across the country have told More Perfect Union that they’ve seen their schedules reduced to often untenably low hours. Many are leaders of the union movement, while others openly support the ongoing campaign.

In Buffalo, management reduced barista Cassie Fleischer’s hours after her store became the first Starbucks in the nation to vote to unionize. Fleischer, who has been an outspoken leader of the movement and sat on the bargaining committee, was forced to get a second job to make up for the lost income.

The new job required her to change her availability, which Starbucks, once famous for its flexibility, refused to accommodate. Instead, the company kept her off the schedule entirely, leading to Fleischer’s dismissal.

Several other workers in Buffalo have openly discussed severe reductions in hours with More Perfect Union.

In Phoenix, a pro-union barista named Sofia Lugo saw her hours slashed from up to 21 hours per week to down to 5.5 hours, despite offering all-day availability six days per week. She tells More Perfect Union that the company blamed the reduction on her age, but Arizona law does not limit the hours or schedules assigned to those aged 16 and older. Lugo was forced to quit her job in search of one that offered more hours.

While still employed by Starbucks, Lugo appeared in a video report produced by More Perfect Union about the company’s attempt to intimidate a union leader named Laila Dalton into quitting her job as a shift supervisor. Starbucks presented the shift supervisor with retroactive disciplinary action for missing shifts months ago during a hospital stay.

More Perfect Union has spoken to workers in states across the country about the cut in hours and the benefits being put at risk.

“In the eight years I’ve worked for Starbucks, I’ve never seen the company slash hours this severely or this widely,” Sarah Pappin, a shift supervisor in Seattle, WA, wrote to More Perfect Union. “While it’s true we trim hours in January and February, I’ve never see us cut hours like this in March when our business is already ramping up for the season. Many of my coworkers have no idea how they’re going to pay rent for April. Some of my core that were previously getting scheduled 20+ hours a week are being scheduled less than 10 now.”

Pappin added, “As a full time supervisor I have always been scheduled around 38 hours a week and been told I’m supposed to be guaranteed 30+ by multiple managers over the years. I’m currently being scheduled 26 hours a week. I have never been scheduled that low in my entire 8 years here.”

“As a full-time, low-income college student, I rely on at least 20 hours a week for benefits and paying bills,” Joseph Thompson, a barista at the Ocean & Water store in Santa Cruz, CA, said in a statement. “Living paycheck to paycheck is already hard but now that Starbucks is cutting hours across the board and targeting union leaders just further emphasizes the need for a union.”

Workers have now voted to unionize at six different Starbucks locations, and elections in New York, Virginia, Arizona, and Pennsylvania are scheduled for the next month. 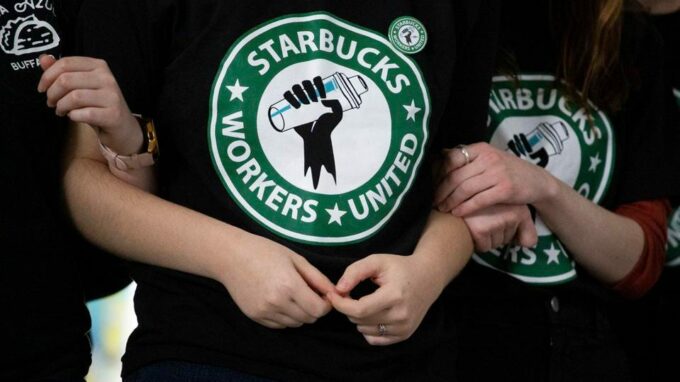