True, the chain pays its workers industry-low wages in under-staffed stores that can be magnets for armed burglary. And yes, Dollar Store management targets economically struggling communities, focusing on customers who make less than $40,000 a year and visit the store multiple times a week. “The economy is continuing to create more of our core customer,” CEO Todd Vasos said in 2018.

In reality, without knowing it, customers are often paying Whole Foods prices for dollar store groceries.

A More Perfect Union investigation reveals that Dollar General charges premium prices across a range of staple goods—52% more per pound for chicken breasts than its cheapest competitor, for instance—but masks the high cost from consumers by stocking smaller pack sizes.

In other words, Dollar General often charges more for less. It offers low absolute prices for national brands, but in smaller pack sizes than other stores, in order to push per-unit costs higher.

That strategy is a primary driver of the company’s ability to achieve gross margins significantly above the industry average, enriching shareholders often at the expense of customers. “Dollar General,” Morningstar Research wrote in a recent analyst report, “can meet its customers’ needs for a low absolute-dollar price point through smaller packages that carry better margins for both the retailer and the manufacturer.” 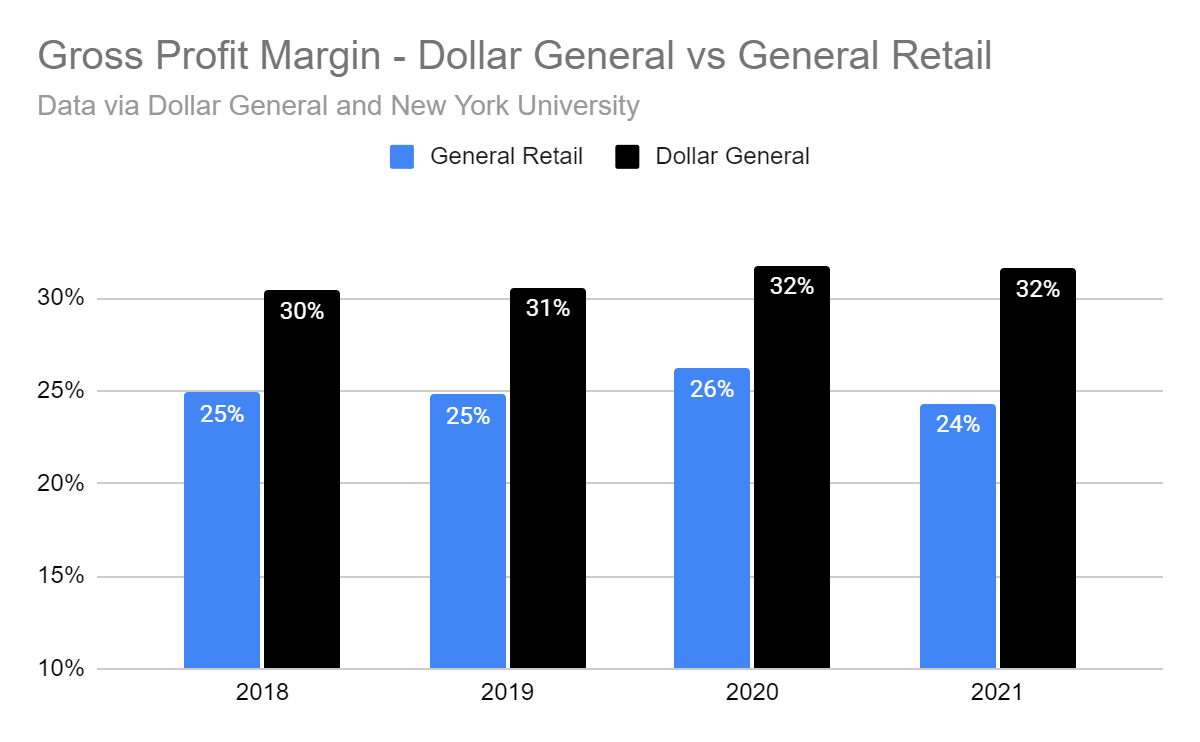 Gross margin measures the amount of profit a retailer earns from each sale after accounting for the cost of the product. According to data from NYU Stern, Dollar General’s gross margins are significantly more than its competitors, which include Kohls, Ross, and Dollar Tree. This approach turned Dollar General a Wall Street darling since it re-entered the public markets in 2009. Investors who purchased $100 worth of Dollar General stock in 2009 would find themselves with nearly $1080 today–an increase of over 1000%.

Customers are often not that fortunate. 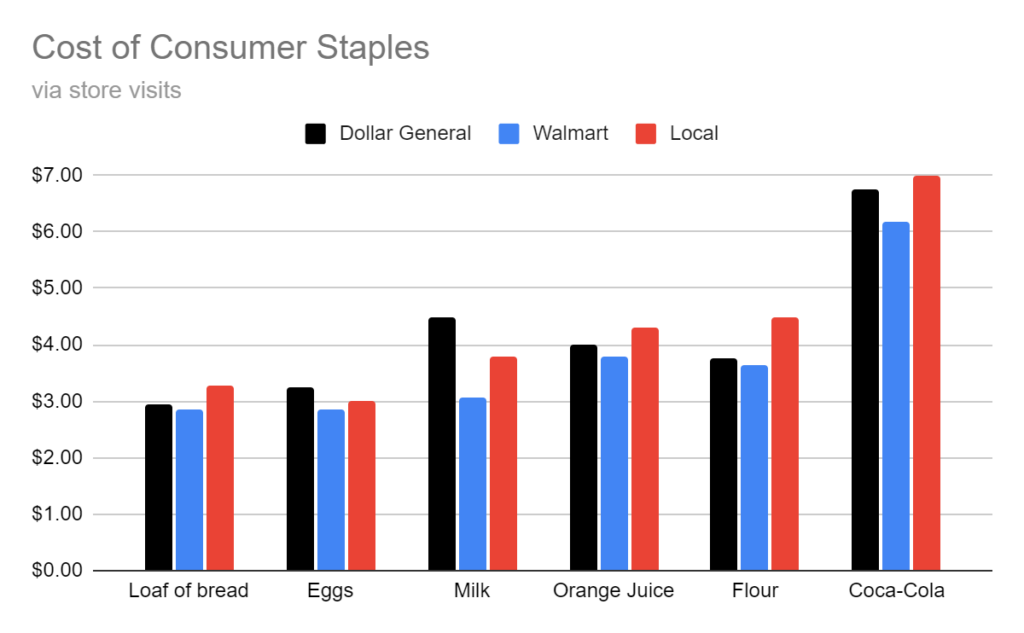 For most shoppers, a loaf of bread, a dozen eggs, and a gallon of milk are all standard measurements for products. Dollar General offers competitive prices in five of the six surveyed products.

However, when products lack a common pack-count, the opposite is often true. Dollar General often sells the lowest cost product, at a poor value. 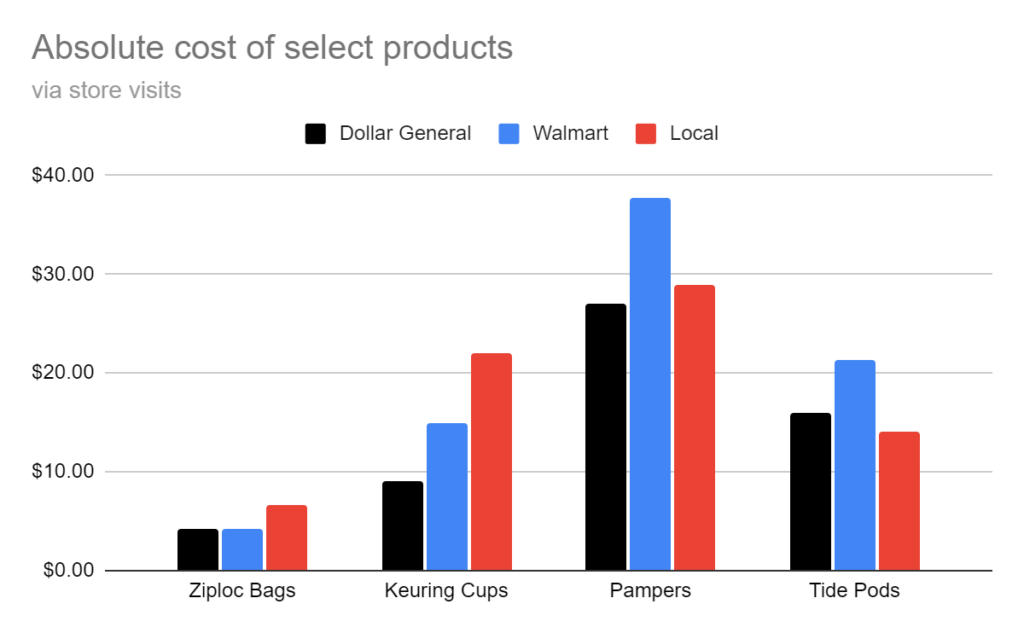 The above chart shows that in absolute terms, the company offers the lowest price (or just 3 cents higher for Ziploc bags) in three of four categories. 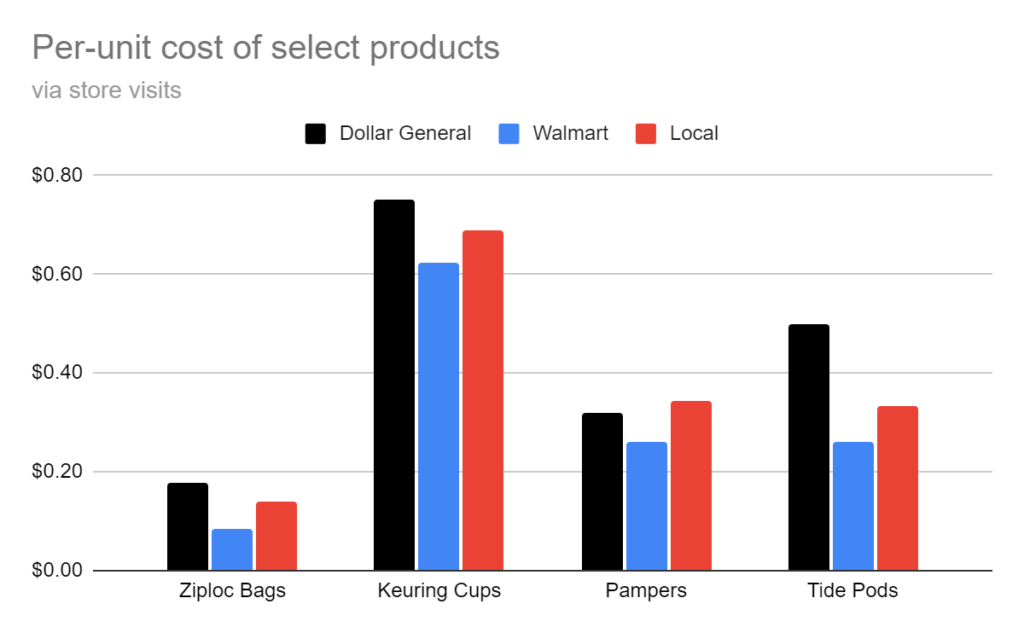 But when products are evaluated on a per-unit basis the ratio flips. Dollar General now offers the highest cost per item for three of the four products. 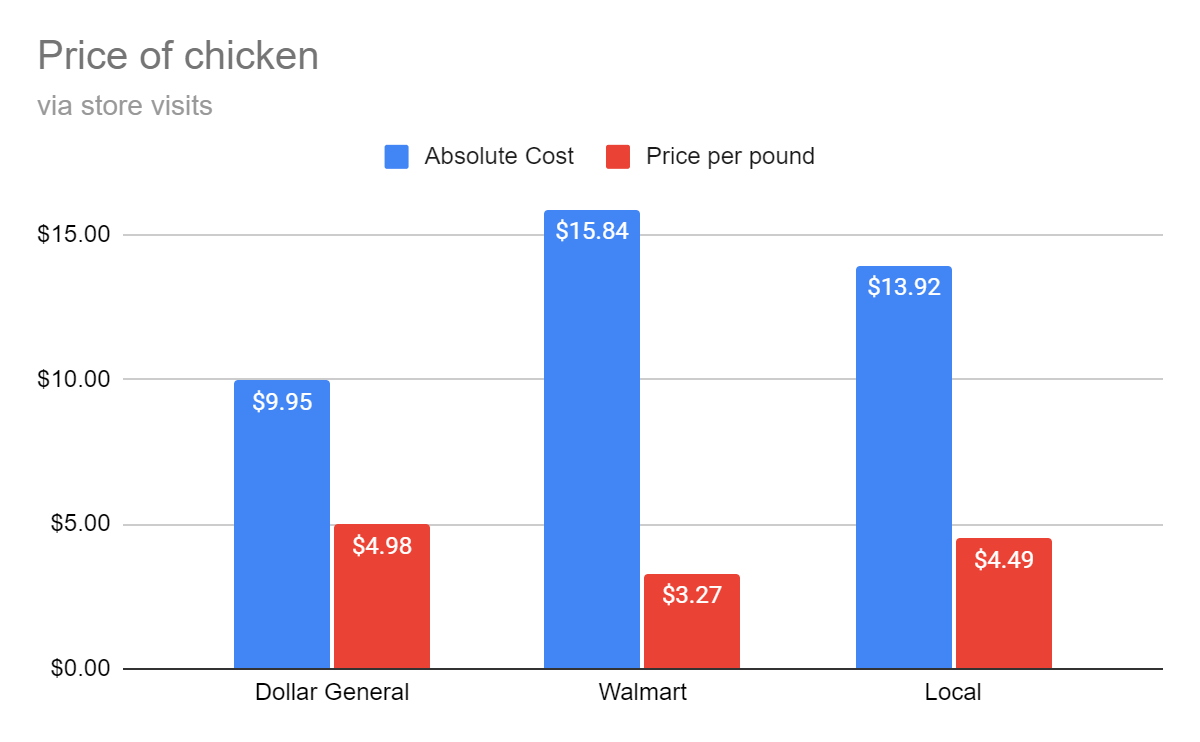 The disparity is most illustrative in chicken, America’s most popular animal protein. In absolute terms, chicken breasts at Dollar General are about 40 percent less than its cheapest competitor. However, they are 52% more expensive on a per-pound basis. In fact, at $4.98 a pound, chicken breasts at Dollar General are only one penny per pound cheaper than the nearest Whole Foods.

This merchandising strategy, which determines the products Dollar General sells and their associated shelf prices, is partly predicated on the idea that low income customers are either less likely to plan regular grocery trips or can’t afford bulk purchases.

In the eyes of management, the average shopper “doesn’t look at her pantry or her refrigerator and say, ‘You know, I’m going to be out of ketchup in the next few days. I’m going to order a few bottles,’” CEO Todd Vasos told the Wall Street Journal in 2017. “The core customer uses the last bit of ketchup at the table the night prior, and either on her way to work or on her way home picks up one bottle.”

Vasos’s belief is validated through recent third-party purchasing data. According to retail analytics firm Aggragator, the average customer shopping at Walmart, America’s largest discount retailer, spends around $45 a trip. The average basket-size at Dollar General is just $16, lending the company its discount reputation. For the $16 transaction, Dollar General captures around $5.12 in gross profit. Walmart, who operates on a low-price business model, would earn $1.14 less.

This merchandising strategy has worked in tandem with management’s real estate approach to transform Dollar General into America’s 16th largest retailer. It primarily builds stores in locations where other major retailers won’t go. Management locates bare-bones small footprint stores in underserved and poor areas of America. With limited options, and not enough money to travel elsewhere, local customers are often left captive to the Knoxville, Tennessee based retailer.

A 2018 Guardian report highlighted how in one small Kansas town, Dollar General used its purchasing power to aggressively price certain items, which created a food desert after driving the local grocery store out of business. Research by the Institute for Self Reliance suggests that dollar stores siphon 30% of sales from local merchants. The strategy creates a vicious cycle in forgotten parts of America. Less jobs, less tax money, and less options for local communities. “It’s a small town,” a shopper told the WSJ in the same 2017 article, “and we don’t have another choice.”

Without legislation reeling in the company, there’s no end in sight. Last year there were nearly 3,600 large store openings in the country. Dollar General accounted for ⅓ of them. “Essentially what the dollar stores are betting on in a large way is that we are going to have a permanent underclass in America,” a commercial real estate analysis told Bloomberg in 2017. “It’s based on the concept that the jobs went away, and the jobs are never coming back, and that things aren’t going to get better in any of these places.”