Dollar General CEO Todd Vasos faced questions this week about wage inequality after the company’s SEC disclosure revealed that he made 934 times more than the median Dollar General worker.

Management contended that the 935:1 CEO-to-worker ratio is incomplete, as the standard SEC calculation does not take into account “non-quantifiable benefits” the company offers to associates. But those benefits appear to be limited to free classes for workers and their families at two for-profit universities. Facing public criticism, Vasos addressed pay inequities during Wednesday’s shareholders’ meeting. “Our ongoing goal is to pay competitive wages,” Vasos told the audience. “Market by market, position by position.”

Executives at Dollar General are compensated above market rates while other roles are paid significantly less, public financial filings and independent research reveal. An analysis of recent financial filings reveals that compensation for Dollar General’s 5-member executive team is 41% and 13% higher than rival discounters Five Below and Family Dollar. Research from Harvard’s Shift Project and the Economic Policy Institute suggests that 92% of its workforce earns less than $15 an hour, the worst rate of the 66 different large service sector employers surveyed. This confirmed findings from UBS, which estimated that Dollar General pays the lowest hourly rate of all 25 retailers it surveyed. 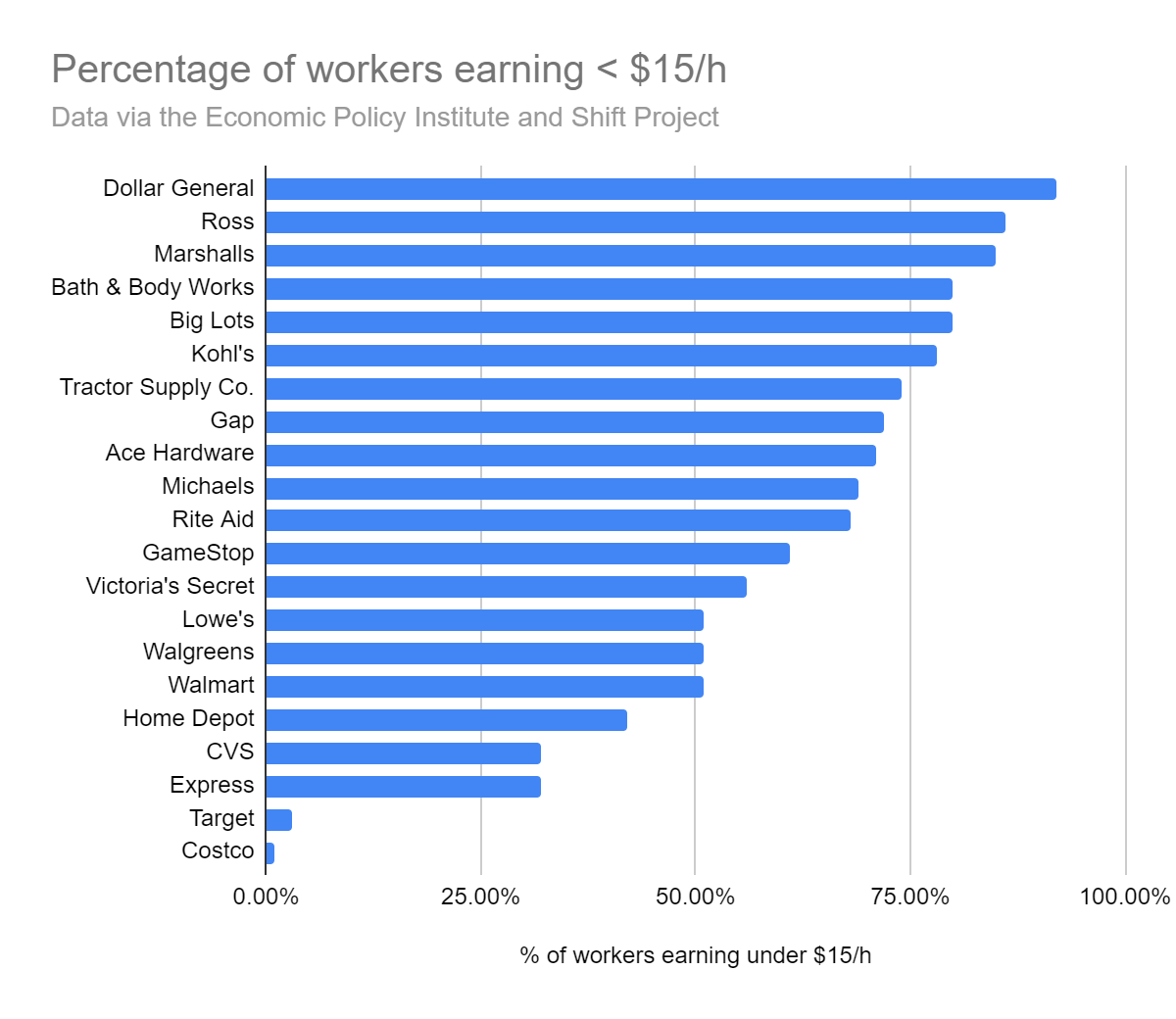 Since the Great Recession, the Tennessee-based retailer has been a financial bright spot within the retail industry. Dollar General utilizes a stringent cost structure to return superior results for shareholders. Recently, the stocks of mainline retailers like Walmart and Target have tumbled due to declined profitability caused by increased supply chain costs and rising wages.

Throughout the pandemic, Dollar General has prioritized redistributing excess profits to shareholders rather than workers. In 2021, the company spent $2.5 billion on stock buybacks, while rewarding the company’s roughly 160,000 frontline workers with about $1,000 each on average in COVID-related bonuses. 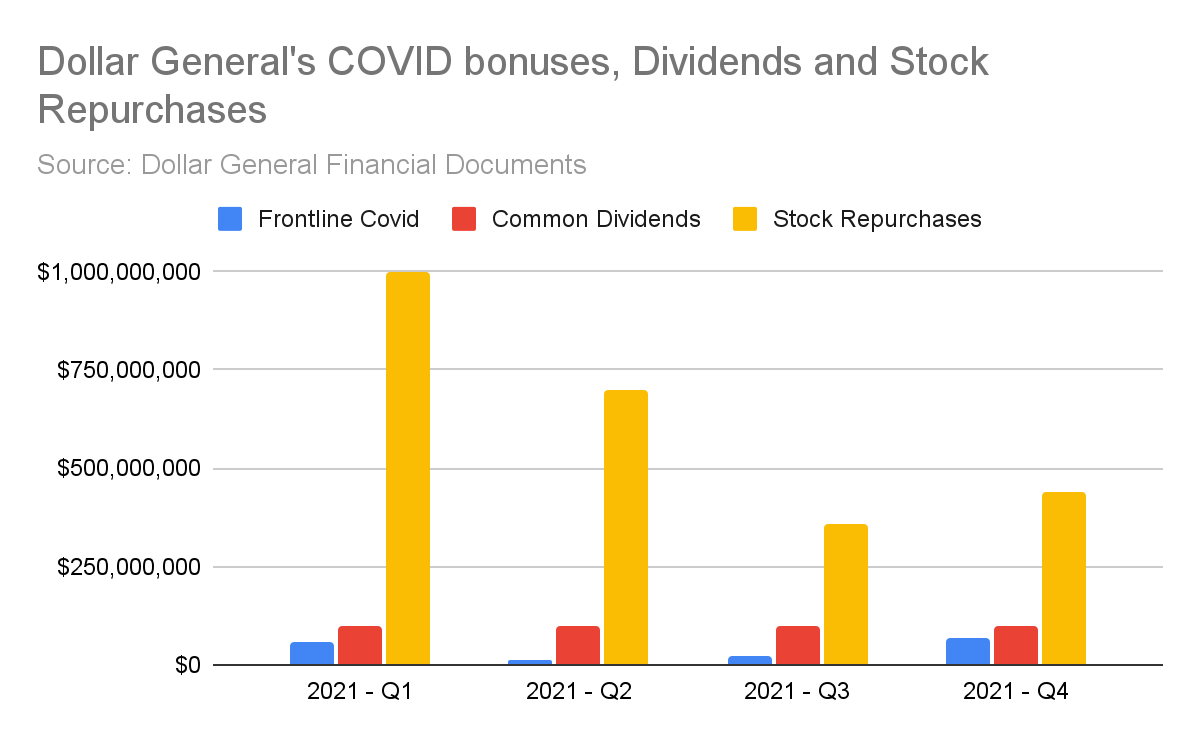 The reliance on low wage associates isn’t unique to Dollar General, but management has optimized its implementation. Most retailers purchase stores near major population areas, ensuring steady foot traffic. Dollar General typically leases buildings in largely poor and underserved locations, many of whose storefronts were left empty after customers migrated towards chain stores in more affluent surrounding areas. The Financial Times reported that industry research suggests that 57% of its customers come from households with income under $49,900, and 30% earn less than $25,000. “Today the dollar chains are capitalizing on these conditions,” Stacy Mitchell concluded in the Institute for Local Self-Reliance, “much like an invasive species advancing on a compromised ecosystem.”

In 2007, private equity firm KKR purchased Dollar General in what Fortune Magazine called “one of its most successful deals ever.” KKR immediately replaced CEO David Perdue, who would go on to become a Republican Senator of Georgia. The company upended the outdated operations and further committed to the strict cost structure. The new management’s big innovation was to remove power from local store managers and centralize ordering and assortment planning at headquarters. Previously, local management had discretion over 20% of the store’s offerings. “Now store managers have autonomy over exactly zero,” Bloomberg’s Jason Kelly wrote in The New Tycoons, his book on the private equity industry.

Perhaps most importantly for Dollar General, the lack of autonomy further enables a stringent staffing model. With most of the business decisions managed centrally, there’s little to do in stores outside of stock inventory. A typical store employs just nine workers. On a square footage basis, that equates to one worker for every 823 square feet of retail space. Walmart, the original rural discounter, employs one worker for about 490 square feet. That number could decline further, as the company intends to implement a self-check out option across the chain, with plans to pilot 100% self-check out stores this year.

A store manager’s main responsibility is now ensuring a steady stream of low-paid employees are available to stock the shelves — a nearly impossible task given the low staffing budget. Managers are often required to work 70+ hours a week to ensure the shelves are full. “We regularly see shelves that are stocked in a disorganized manner,” an analyst at KeyBanc Capital Markets told the New York Times in 2021. “That indicates that the store doesn’t have enough labor or the right labor.”

A viral TikTok video this month showed a Dollar General in Tennessee that was overflowing with unpacked merchandise and staffed by a single employee. The video included the hashtag #PutInATicket, a reference to former Dollar General store manager Mary Gundel, who was fired after making a series of TikToks documenting how the company kept her serially overworked and understaffed. Grundel told the New York Times that whenever she raised concerns, the company did nothing but urge her to “put in a ticket.”

The low staff, and the associated societal consequences, are quickly becoming a public health issue. Reporting at ProPublica uncovered that in 2017, there were thirty-two armed robberies across the 18 dollar stores in the city in Dayton, Ohio. The mayor told reporter Alec MacGillis that employees are often encouraged to defy court orders and not testify in robbery cases in order to staff the stores. How Fort Worth Activists Defeated the Dollar Store Invasion