We didn’t think it would come to this. A nationwide strike. 111 stores. Dozens of cities. Over a thousand workers on the picket line waiting for Starbucks to come to the table. But Starbucks hasn’t been negotiating in good faith.

[Michelle Eisen]: We really are just at a loss for words.

Seamus: They just backed out of our bargaining process altogether.

264 stores have unionized. Not one has a contract. Instead, Starbucks has been waging a brutal campaign of union busting. They’ve been accused of over 900 federal labor law violations. The NLRB has filed complaint after complaint against them.

Kaylyn: We’ve had a total of ten union baristas fired in our area.

James: I am a fired Starbucks employee, and I was retaliated against by the company, so I think it’s important to essentially assert my rights.

They’ve fired union organizers, cut hours so we lose our healthcare; and they even shut down entire stores that were unionizing.

James: As soon as we voted to unionize, they closed our store for repairs that we requested over two years ago.

We decided to remind them that we can shut shit down too. Red Cup Day, the busiest time of the year. The perfect time for our Red Cup Rebellion.

[On picket]: What’s your sign? What is it? Change is now brewing!

We love getting to work together every day, and when we strike, the community always shows up, on our side.

Jacob: The support that my store sees from the community every single day is huge.

Starbucks is counting on us to give up, and quit. But we’re not leaving the bargaining table. We’re here to negotiate in good faith. Are they? 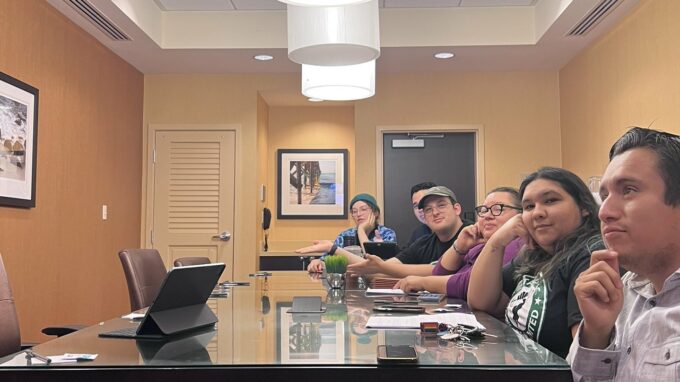 Starbucks Walks Out of Contract Negotiations With the Union