We followed the union drive at Amazon’s Staten Island JFK8 warehouse from day one. Exclusive footage from inside the early days of the Amazon union drive reveals how workers beat the odds and successfully won the first Amazon union in U.S. history.

In March 2020, Christian Smalls organized a walkout of 100+ Amazon workers over insufficient COVID protections. At the time, Smalls reported workers were recycling masks and using garbage bags to protect themselves from the virus. Amazon fired Smalls following the walkout. A leaked memo revealed a smear campaign by Amazon to target Smalls as “not smart or articulate.”

After visiting the Bessemer, Alabama, warehouse where workers were organizing with RWDSU, Smalls and other Staten Island workers started organizing. They formed Amazon Labor Union, an independent union of Amazon workers.

Workers overcame aggressive union-busting and arrests by the NYPD. While Amazon attempted to pin Smalls the face of the movement, Smalls is adamant that the workers are the true force behind their historic win. “I never said it was Chris Smalls versus Amazon. It’s always gonna be Amazon versus the people,” Smalls said directly following the win.

Another Staten Island warehouse will vote whether or not to unionize at the end of the month. Amazon Colludes with NYPD to Arrest and Intimidate Workers 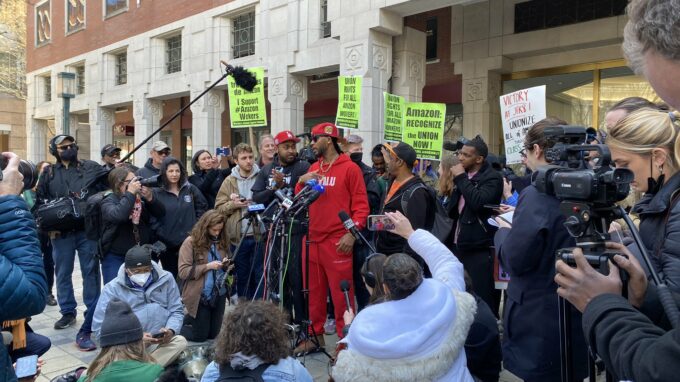