In an under-the-radar congressional race, Marie Gluesenkamp Perez, a working class auto shop owner, is taking on pro-Trump Republican Joe Kent in Washington’s third congressional district. An unconventional approach has her on the verge of a stunning upset. Below is a full transcript of the video.

Marie Gluesenkamp Perez: I am so tired of Fox News telling me what Democrats look like.

[News clip]: Democrats have become the party of elites.

Marie: We are rural. We work in the trades. We fix things. We work with our hands. It is so obnoxious to me to be overlooked and painted with a broad brush.

Marie: Democrats need to start electing people that work for a living, people that look like America, people that are experiencing the same economy as all of us. We, for too long, have been focused on being the smartest, being the most prestigious. You can read all the books you want—if you don’t know what’s going on in your community, it’s irrelevant.

How a working class Democrat plans to turn a red district blue.

Marie: My name’s Marie Gluesenkamp Perez, I am the Democratic candidate running for Congress in Southwest Washington.

[News clip]: Our big story is the win by political novice Joe Kent in Washington’s third district. He’s a Republican unseating six-term incumbent Jaime Herrara Butler and moving on to the general election.

[News clip]: While Republicans vying for Washington state’s third congressional district battled it out among themselves, the Democrat in the hotly contested race walked through the front door in the primary with the most votes at about 32% and a spot in the November election.

Marie: My dad’s family in Mexico owned a gas station in the fifties. I and my husband run an auto repair and machine shop. It’s in Portland, about 45 minutes from my house in rural Skamania county.

Marie: Surprisingly, running a small business is actually very similar to running a campaign. So people need to trust you. They need to believe you understand what the real problem is. You need to listen closely to what the actual issues and what their actual needs are. If you ask me to fix your air conditioning and your brakes don’t work, I’m not going to fix your air conditioning. And that needs to be a conversation of rapport and trust.

Marie [at campaign event]: The government is not going to get better if we keep electing Twitter celebrities and extremists to Congress! We need people who believe that fixing things is inherently noble. I didn’t open up an auto shop so I can run for office, I opened up an auto shop because I believe in fixing things!

Marie: I’m very proud to be a rural Democrat. It sometimes feels like a dying breed. It feels like a body of people that is overlooked and not listened to.

Marie: Rural infrastructure really matters. If we had been investing in our infrastructure the way that we should have been, I wouldn’t be using a radio tower to get my internet.

Marie: People can’t work remotely and live in these communities without reliable internet. And it comes down to even medical issues, or being able to file your taxes online. This is not about cat videos. It’s about essential services and medical care.

Marie: So my husband and I built our house ourselves out there, which sounds really romantic. But the reality is for people in my generation, I mean, it is really, really hard to find a lender that will work with you. And that was the way that we could get our foot in the door of the housing market.

Marie: 80% of people in Skamania county work outside of the county, because there are almost no jobs there. And we’re seeing that all across rural communities, they’ve hemorrhaged the essential businesses like autoshops, and pharmacies, and banks, and often it feels like we’re being told to pivot to tourism, and let me tell you, people are not really excited about this idea of going from working in the woods making $100,000 a year to serving cocktails on a golf course.

[Joe Kent supporter]: I’m for him. Trump’s for him. You’re for him. Your next congressman, Joe Kent.

Marie [at campaign event]: This is a bridge too far, this is a guy who celebrated the January 6 assault, and then last week was tweeting about defunding the department of education. Any fears we had that he was going to moderate in the general… we can set those aside. This is an extremist.

[Joe Kent]: I 100% support Roe v Wade being overturned. I would move to have a national ban on abortion.

Marie [at campaign event]: I miscarried, and you know what I needed? You know what the treatment for a miscarriage is? It’s abortion. You know, without treatment, I might’ve not been able to have my son.

Marie: We deserve respect and autonomy in making those decisions, and privacy. This is not about the minutiae of constitutional law. This is about respecting people’s choices.

Marie [at campaign event]: And we know that the work happens in the middle. That lives get made better by what we can do together, not how far apart we can get splintered. This is about building bridges, about fixing shit.
Marie: We cannot keep winning presidential elections if we stop listening to rural Democrats. We have our unique perspectives and our unique needs, but we’re relevant, and we can’t cede that territory to the Republican party anymore. 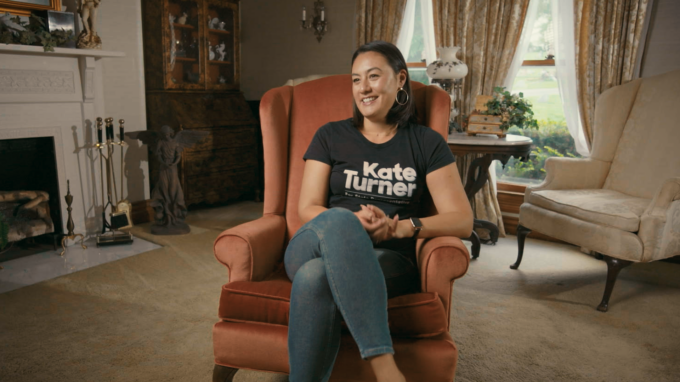