When you imagine a person whose job involves putting their lives on the line at work, you might think of firefighters or military personnel. But there’s a new sector of employees who are risking their lives and facing rampant violent crime on the job — dollar store workers.

In August, dollar stores in the United States were robbed at gunpoint most days of the month, according to an analysis of local news reports by More Perfect Union. Dollar store workers faced armed robberies while on shift last month in Pennsylvania, Virginia, Alabama, Michigan, Mississippi, Louisiana, Colorado, Texas, North Carolina, Florida and Illinois. At least four people were shot.

Despite the heightened threat of violence, dollar store workers are among the lowest paid workers in American retail, with the median worker earning just $17,773 per year in 2021.

Previous reporting has documented how dollar stores have increasingly become magnets for violent crimes. ProPublica uncovered that in 2017, there were 32 armed robberies across the 18 dollar stores in the city in Dayton, Ohio. The problem has grown as the number of dollar stores ballooned in the U.S. in recent years. There are more dollar stores in the country today than there are Walmarts, McDonald’s, and Starbucks combined.

During one robbery last month in Texas, a Dollar General clerk was pepper-sprayed by one person, then thrown to the floor by another. In Alabama, a Family Dollar manager was stabbed in the neck and left in critical condition. In Ohio, a man locked a Dollar General worker in a bear hug and held a screwdriver to her neck until coworkers intervened. In Virginia, an assailant robbed a Dollar General, then shot a sheriff’s deputy before fleeing the scene.

It’s no coincidence that dollar stores are susceptible to violent crime. In line with the dollar chain business model, the stores are perpetually understaffed and strategically located in neglected communities that often have higher crime rates. By paying low wages to a bare bones staff, companies like Dollar General are able to keep labor costs extremely low and grow store numbers rapidly. Though Dollar General has reported 31 consecutive years of growth and profit, and spent hundreds of millions of dollars on stock buybacks, they continue to neglect the safety and wellbeing of the people who staff their stores.

Keshia Brown was working as an assistant general manager at a Dollar General in Holly Hills, South Carolina, when a masked man came up to her register and slipped her a note that said, “Give me everything in your register. I have a gun and I will shoot you.”

Since her daughter had already lost her father to gun violence, Brown said she felt she had to do everything in her power to keep herself and others alive through the robbery. So she emptied the register and the robber ran out the door with the money. She quickly locked up the whole store and called 911 to report the incident.

When Brown finally got a hold of her District Manager about 15 minutes after the event occurred, she was asked two questions. “Is everybody okay?” followed by “What are we gonna do about re-opening the store?”

“We haven’t even been robbed about 10-15 minutes ago and you’re already talking about re-opening the store,” Brown said. “Do you know how that makes your employees feel? They really don’t care.”

She said she was offered a few days of unpaid leave to “collect herself” over the incident, but as a single mother she couldn’t afford to take any unpaid time off, so she had no choice but to continue working at the store.

In 2018, Robert Woods was shot and killed in the Dollar General he worked at in St Louis when an armed robber opened fire. After Woods’s body was removed from the aisle where he was killed, Dollar General remained open, and his co-workers were forced to continue through their shift.

According to reports, Dollar General eventually closed for the day after local residents protested outside the store. “That shows us right there you really don’t care about your employees that you have at your establishment,” Brown said.

In July, Brown and her co-workers submitted a petition demanding that Dollar General address their safety concerns. Rather than meeting the workers’ demands, Dollar General removed her from the store’s schedule, indefinitely. 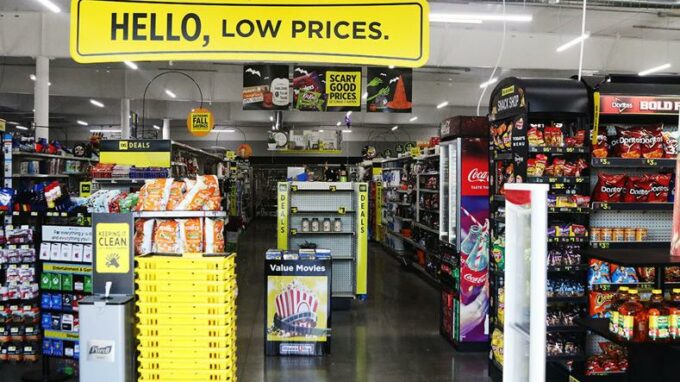