Amazon managers in Schodack, NY knowingly violated the rights of the worker leading a unionization campaign at the ALB1 warehouse.

On Friday, management pulled Heather Goodall, the lead organizer of the local chapter of the Amazon Labor Union, into a two-on-one meeting. Once it became clear that the supervisors intended to deliver disciplinary action, Goodall requested to be joined by a fellow union member, a right protected by the National Labor Relations Act.

“Are you denying me the right to be represented?” Goodall eventually asked, according to audio obtained by More Perfect Union.

“I am saying no,” one of the managers responded. “You cannot have anyone else in here with you.”

Though often singled out and confronted by management, it was the first time that Goodall experienced any official disciplinary action from Amazon. The offenses cited and the timing of the discipline both indicate that they were not standard protocol for the company.

On Friday, the same day that Goodall was delivered her first and final warning by Amazon management, the NLRB announced that the ALU’s petition for a union election at Goodall’s warehouse would be moving forward. Amazon had already fired the VP of the local union as well as several other pro-union workers earlier this month.

The company delivered two write-ups to Goodall in the meeting. The first, a reprimand to her driving down a one-way lane in the parking lot, ignored a key detail of that incident: Amazon has taken to blocking parts of the entrance to the parking lot on days that union organizers visit the facility. Such was the case on July 27th, when the incident cited by the company took place. Goodall was also on medical leave at the time, so she was not acting as an employee during the incident.

Amazon security has grown increasingly confrontational with ALU organizers as they canvass the warehouse parking lot and talk to coworkers about the union, organizers say. Management has called the police several times and sought to remove Amazon Labor Union organizers visiting from Staten Island.

Management also delivered a write-up to Goodall for using her phone to take photos while on the shop floor. Goodall had been taking photos of grave safety violations in the warehouse, which she later delivered to OSHA. The federal workplace safety agency is now conducting an investigation of the company’s working conditions.

The meeting between Goodall and the managers, which lasted about 30 minutes, was at turns confrontational and cordial. Goodall insisted throughout that she be told who filed the initial report against her and which higher-up conducted the investigation that led to the charges. Unable to provide that information, or indicate whether there has been an investigation at all, the manager grew emotional at several points.

“I really am sorry that you are going through this,” Goodall said. “There are other good people here that are just trying really hard to build their career and build their life, and it’s unfair of Amazon…. This is harassment, they know what they’re doing, and they’re putting other people in the line of fire.” 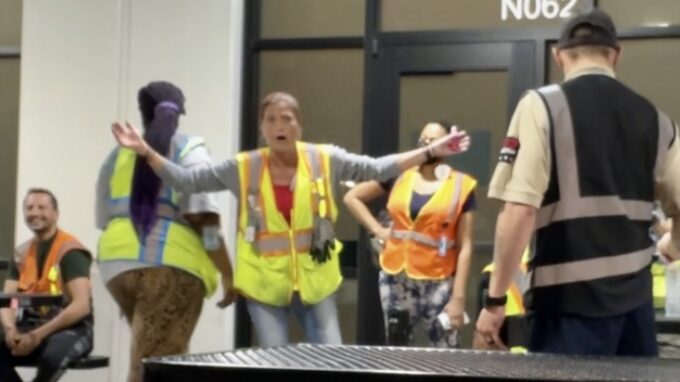